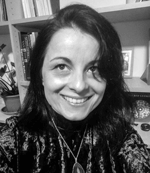 Her fields of research interest are the connection between literature, arts, and science, relating to Spaziergangwissenschaft - promenadology and the concept of consilience (Edward O. Wilson, The unification of science and humanities).

For Animart she co-curated "Made of Walking" in Delphi (2016 and 2017), a creative interdisciplinary encounter between researchers and artists with a focus on walking, sound art, and landscape. "Made of Walking" in 2018 Akamas Cyprus was built on her concept Plantescape (plants, literature and walking), elaborated in 2019 as a member of the scientific committee of Made of Walking / Walking Arts Encounters - Conference in Prespes, organized by the University of Western Macedonia, Greece. Plantescape was as well pillar of activities at the Kinono Art Gathering in Tinos Greece and during the Analogio Performative Arts Festival 2018 in Athens.