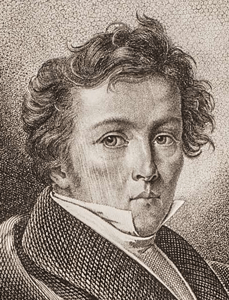 
Johann Ludwig Wilhelm Müller, is a German poet and philhellene who was born in Dessau on the 7th of October 1794 and died in his birth city on 30 September 1827. At the age of eleven, after losing his mother, he wrote his first poems. In 1812, he started to study literature and history at the University of Berlin, under the influence of the philosopher Frederick August Wolf. In 1813, he volunteered in the Prussian army to fight against Napoleon. The experience of war contributed to transform him into a poet and patriot under the Romantic spirit of this era. Meanwhile, he became a great supporter of the Greek struggle against the Ottoman Empire writing poems and promoting Greek freedom in Europe, thus he acquired the nickname "The Greek".

Three of his poems, related to Hydra island, translated again in modern Greek, in the frame of the anniversary of the two hundred years of the Greek Uprising of 1821. Hydra island, the "High, steep, sturdy rocks, on which Hellas’ freedom rests!" express its gratitude organising a tribute to the philhellene poet Wilhelm Müller.