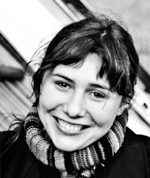 
IZABELA PLUCINSKA was born in Koszalin in Poland on 06.10.1974. She graduated from Lodz National Fine Arts Conservatory, National Polish Film School in Lodz and National German Film School “Konrad Wolf” Potsdam- Babelsberg. In 2004, her graduate film project “Jam Session” was selected for the short film competition at the Berlin Film festival 2005, when she has been awarded with Silver Bear. “Jam Session” has been presented at over 60 international festivals and won a number of international prizes. In 2006, Izabela founded her own production company “Clay Traces” in Berlin.