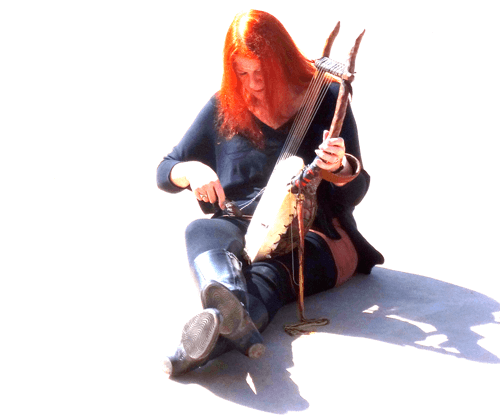 Ros Bandt and friends. A sound installation and performance. Ros Bandt will perform tortoise music on the illuminated ancient Greek lyre in the Sikelianos amphitheatre. Members of the Milena principle walking artists directed by Belgian curator Geert Vermeire and Simona Vermeire, will transform the tortoise into a spider creating a giant illuminated people spider aeolian harp that can be played. Moving through the stellar electronic sounds provided by Jon Drummond a new international pilgrimage is starting together here at Parnassus, for the blessing of Apollo.

Julia Rédei works as a Lecturer in German at Regent’s University London, and is a writer of short fiction and poetry. She hosts collaborative writing workshops and leads exploratory walks. Born in Germany, she lived in China in the 1980s and in the USA in the 1990s before moving to London in 1996. She has been practising yoga for over thirty years, and in 2013 she started studying Tai Chi and Chi Kung in the Wudang tradition, with regular training in London and residencies in the Wudang Mountains, China. She speaks German, English and Mandarin Chinese and is interested in the way the language we use while walking shapes our experience of movement and space.

Katerina Drakopoulou is an actor/performer, Butoh dancer, and physical/dance theatre trainer. Following her postgraduate studies (MA in Ensemble Physical Theatre, University of Huddersfield; MA in Performance, Goldsmiths College; BA in Drama and Theatre Studies, University of Kent), she worked as a Lecturer at the University of Leeds and at Manchester Metropolitan University. Since 2010 she has been running classes and workshops that focus on psychophysical approaches to acting. She has performed in various productions in Greece, England, Japan, and the U.S., and has collaborated with world-renowned Butoh artists such as Tetsuro Fukuhara, Valentin Tszin, and the Torifune Butoh-Sha Company. In March/April 2016, she worked as a facilitator for the Marina Abramovic method at the Benaki Museum in Athens. In April 2016, she presented her new solo, long-durational, site-specific Butoh performance, entitled “22 stops” at the “In Progress Feedback Festival”. Since then the work has been presented in various festivals:
at the Benaki Museum in the context of “[Mis/Dis] Placed: Performances” at Athens Photo Festival 2016 at Beton7 in the context of the “Visions – V Ideas, Performances, 3rd Edition” at Treno sto Rouf in the context of Compartments Dance Project, and at Romantso in the context of Multimation – Metamorphosis #1. https://22stops.com/

02. Lina EFSTATHIOU Dancer, Choreographer, Dance teacher, Greece
Dancer, dance teacher and choreographer, started dancing at the age of 4. She has studied ballet, contemporary and jazz dance. Has also attended seminars of tango argentine, musical and devised theater, tai-chi and yoga. She has participated in several dance and movement performances and since 2015 she is also dancing and choreographing for her own group “Liquid DanceTheatre”.

03. Aliki GEORGOULOPOULOU Dancer, dance teacher, choreographer and Hatha Yoga instructor, Greece
She studied dance successively at the Matey Dance School, the Greek National School of Dance and the Professional Dance School of Despina Grigoriadou. In 2013, Aliki received her diploma from the Yoga Academy NYSY Studios. She has attended dance seminars by distinguished teachers in Greece and abroad, such as Ulrike Hasbach, Masaki Iwana, Sumako Koseki, Yumiko Yoshioka, Moeno Wakamatsu et al. Aliki collaborates with visual artists on the creation of performance and video projects. She works in theater as a performer, actress, dancer and a choreographer. She is also attending acting lessons. From 1999 to present, she dances and teaches Butoh, the Japanese dance theater art form. https://alikisea.wordpress.com/

04. Medea KASTANOU Dancer - Dance teacher, Greece
She studied dance at Kalamata's dance school since the age of 4, then at Trinity Laban school and Rallou Manou professional dance school. She has attended different types of dance seminars, such as performance, CI, flying low, physical theatre, theatrical studies etc in Greece and UK. She works as a ballet and contemporary teacher in schools located in Athens and works also in theatre as performer, dancer, actress and choreographer. She has choreographed "Coffee Tales" at "Mediterranean Bodies", curated by Geert Vermeire, and "Empeirama 1" due to "RabbitLab 1.0" dance festival. The last two years is a dancer in "YelpDanceCo" and a dancer and a teacher in "Skytali", a vibrant educational plan that introduces movement to primary school children.

05. Marianna MAKRI Dancer-Performer, Dance Teacher, Choreographer and Involvement Consultant, Therapeutic Movement & Energy Healing Facilitator, Greece. Graduate of Classical & Contemporary Dance (ESS Nikis Kontaxakis) since 1997 has been teaching Modern dance, dance stretching, Action for actors, Dance & Martial Arts, Intuitive movement & improvisation and Therapeutic dance for women. She specializes in Contact Improvisation training and teaching, which he teaches in recent years in Athens. As a teacher she has worked in Athens as well as in Theater Schools (G. Theodosiadis - Association of Piraeus Association). She has many years of experience in the study and training of various methods and techniques such as: Contact Improvisation, Butoh, Martial Arts (Ninjutsu), Physical Theater, Axis Syllabus, Feldenkrais, Fasciatherapy - Somatopsychagogy (Method D. Bois). She has also attended the workshops of Stage Design & Performance Lab by Maria Chaniotaki. She has participated in a variety of dance groups and improvisation, Contact Improvisation, Performance and Video dance.

06. Eleni NAKOU Dancer, dance teacher, Greece
Eleni Nakou is a professional dancer, dance teacher in Greece She has graduated from Professional Imperial Dance School Despina Gregoriadou ( 2013) and she also studies at National and Kapodistrian University of Athens - School of Philosophy. She is a dance teacher in Greece at Sylvias Vousoura Dance School, has participate as a dancer in many contemporary performances and classical ballet performances too, from 2011 until 2017. Casted as member of Magnitis Dance group for the production of “Rear Guards” choreographed by Stefania Mulona for Idrima Mixalis Kakagiannis and 2017 was a member of Footsteps Dance Company. She has took part in 11th Dance Festival of Greek Choreographers “Nees Dimamies” as a dancer and in Gala Dance Festival S.I.S.X.E as dancer( 2010-2012) and also as a teacher-choreographer( 2016-2017). She has choreographed an Art Video for “interfaces”, written and directed by Paulos Trikodakis (2013). She has also participated in a lot of workshops/seminars for contemporary dance, Physical Theater and ballet.

07. Eleftheria RAPTI Dance/movement artist and researcher, Greece
She holds a practice-based PhD in Dance Studies from the University of Roehampton in London and an MA in Contemporary Dance Performance from the University of Limerick in Ireland. She has also studied Philosophy-Psychology- and Pedagogy at the Philosophy School of Athens University in Greece. She has made and showed work solo and in collaboration and has participated as performer in work by other artists. Her most recent work was made in the framework of Anapoda Festival of performing arts in Rhodes, Greece in September 2016. Eleftheria incorporates in her practice her study of various somatic practices such as Body Mind Centering, and she is a yoga teacher and practitioner. In spring semester 2017 she was teaching in Nafplio Theater Studies Department a module in Contemporary and post-modern dance practices.

08. Nefeli STAMATOGIANNOPOULOU Composer, musician, performer, researcher, Greece.
Nefeli Stamatogiannopoulou was born in Athens and she is a composer as well as a theatrical and music director/performer. Her music education started when she was young and was quickly led from playing the piano to learning the electric bass and started playing in bands and performances. Having always dreamt of combining Composition with Theatre and Film, she studied at the department of Composition and Performing Arts of the University. Nefeli dealt with improvisation using the Contra-bass and emphasised on the composition in relation to movement.She has been the main composer in many kinds of performances, theatres and films. Also she has presented her work and collaborations at NEZ International Film Festival, BIOS Theater, Drama‘s Short Film Festival, the Aeschylean Festival in Eleusina, the Onasis Cultural Centre, the theatre of N. Kosmos, the Athens Concert Hall, the Institute Grotowski and more. She is the founding member of the musical group Spooky RedRum and the research artistic group Oν OFF, which has as a main goal the composition in relation with movement and speech.

09. Ioanna THANOU Architect, Movement practitioner, Greece
Ioanna Thanou is graduate architect of the Technical University of Crete and parallel student in Dance and Movement Studies at the American College of Greece. She is interested in the development of design techniques, which encourage body awareness and mobility, as an extent of her dissertation and graduation project. Augmented corporeality is a key objective, both in her design assignment as well as her artistic research. She has attended workshops of Body and Mind Dance at the Movement Research Laboratory in New York (2017), Performance Making Intensive Laboratory, led by Anna Furse,, and dance classes with distinct teachers, such as Colleen Thomas (NY), Martha Eddy (NY), Linta Kapetanea(Rootlessroot), Dora Hostova, Emmanouela Korki, etc., as well as she had been member in Athens School of Fine Arts Theatre Team for two years. Participation in various architecture and design workshops and competitions: Mushroom Mycelium in Your Home+Grow it Yourself Workshop at Wanted Design Week, New York, “Architecture meets Robotics”, Design Marathon and Master Class, (Israel 2015), RETHINK Athens International Architecture Competition, in association with Ctrl_Space LAB architects. Meanwhile, she has recently been established in Paris, as a design project manager assistant, realised internship in Parametric design and 3d printing techniques (2016) and worked as freelancer in planning and construction of exhibition booths for Fetrix S.A..

10. Chara TZOKA Actor, performer, Greece
She studied intensively for two years under the creational spirit of the Lecoq pedagogy in the school of physical theatre "École Internationale de théâtre LASSAAD", in Brussels. Since then she participated in various projects and took part in festivals in Athens and abroad creating performances based in movement, narration and polyphonic singing. With some fellow students she created the international theatre company "Iliact" which work is based on mask playing. She also holds a degree in "Primary Education" from University of Athens.