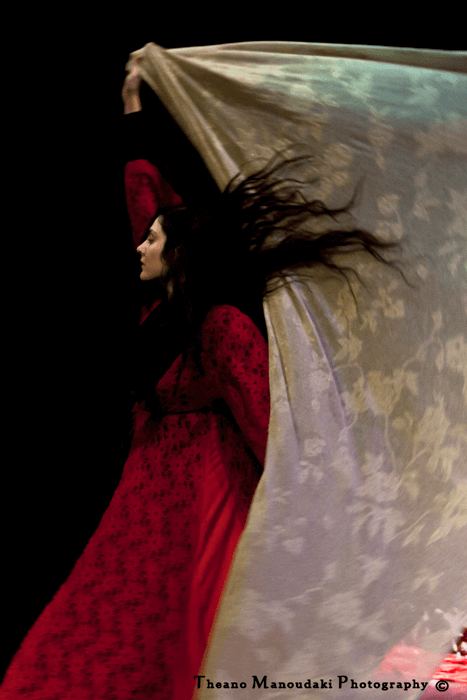 A music – movement performance themed between light and darkness, Apollo and Dionysus, Eros and Erebus

The art of foretelling, as light and as bait for a divine love, will enchant the mortal. The ritual dance of a virgin dedicated the light will turn into a lust of the darkness, under the musical animation of god Apollo, of god Dionysus.

The hubris of ritualizing Eros as Lucifer leads to the disaster, for both the divine and the human. And then, without any divinity in love, humanity will have been led to its self-destruction, as it does perhaps today. Will there be any fearless and heroic young virgin lovers to claim again the light of Eros?

He is a classic guitarist and music composer, his diploma obtained from Delphic Conservatory of Athens. He often performs in recitals and festivals of classic guitar and he has also participated in the music group Graviton. At the same time, as a composer, his works are played in Greece and abroad, by renowned artists and bands, such as E. Fampa, T. Sikelianou, K. Tseregof and Arcadia Quartet. Moreover, works of his are included in a musical album for modern Greek composers by the company Naxos and a print publication of the world repertoire by the company Les Productions D’ Oz. His first personal work has recently been released by the Foka+Negra Entertainment company, entitled "MAKRIA" and featuring Eirini Polydorou as a singer. It includes ten songs, influenced by classical, rock, traditional Greek music, new wave and Brazilian bossa nova.

She works as an actress, a choreographer, a singer and a theatre director. She holds a BSc of the Department of Management and Science from the Athens University of Economics and Business, a MA of International and European Studies from Panteion University, and the European Diploma in Cultural Project Management from the Fondation Marcel Hicter. Since 2000 she has worked in numerous performances in Greece and abroad, in dance, theatre, dance-theatre. She has had a successful international career in Rhythmic Sportive Gymnastics during 1994 – 1999 and she is a former member of the Austrian company of dance, fire performances and technology circus arts Phoenix Firedancers.