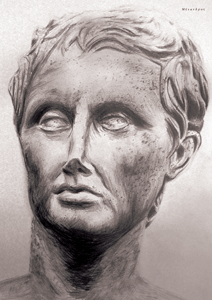 The play is in ancient Greek language

This performance is composed of act 2 and 3 of Menander’s EPITREPONTES (Men at Arbitration), the text of which parts survives without major loss today. Act 2 is well known for its "arbitration scene" by two slaves making a kind of forensic speech, from which scene the play’s title derives. A shepherd Daos found a deserted baby, and handed it over to a charcoal-burner Syros. However, there were also some valuable ornaments abandoned with the baby and Daos retained them apart from it. The known part of the act starts with the scene where Syros demands the treasure from the shepherd. The two slaves decide to arbitrate the matter to a passerby wealthy citizen Smicrines. After hearing the speech of each disputant, he gives judgement that the valuables should belong to the baby, and the baby to Syros. Having acquired and examining the treasures, Syros meets a slave named Onesimos, who found a ring which belongs to his own master Charisios among the treasures. Onesimos snatched the ring from Syros claiming that it is his master’s.

The remaining part of Act 3 is characterized by a comical dialogue between Onesimos and Habrotonon, a hetaera. On the day after seizing the ring from Syros, Onesimos is in a dilemma: it is surely unreasonable for him to give the ring back to Syros; On the other hand, returning it to his master might spark another trouble. It was in the night festival of Tauropolia held in the previous year that Charisios lost the ring, and there he committed a rape on a girl while drunk heavily. This means that Charisios is probably the father of the deserted baby. The situation was even worse for Onesimos, since it has recently been known that Charisios’s new wife Pamphile (Smicrines’s daughter) secretly bore a baby and abandoned it. If Onesimos shows the ring to the master in this situation, he might be upset and do away with Onesimos. Learning his difficult situation from conversation, Habrotonon offers him a help. She then successfully proposes a plan to examine whether Charisios is surely the infant’s father by pretending herself to be the raped girl with the ring in her hand and the baby in her arms.

The text of the play is lost after the scene where Habrotonon exits with Onesimos’s assent and Smicrines just arrives furious with lavishness of his son in-law and try to persuade Pamphile to divorce him. It is known from other surviving parts and fragments however, that Habrotonon correctly identifies Pamphile herself as the girl raped by Charisios in the festival, and the abandoned infant as the baby of the two. The story thus concludes with the couple’s reconciliation, a happy end in ancient standard (though Charisios does not get any apparent punishment for his sexual violence throughout the play).

The Classical Drama Society at Tokyo University has organized the production of EPITREPONTES (Men at Arbitration), an ancient Greek comedy by Menander, presented in Tokyo on March 25 and 26, 2015 and in Kyoto on September 26 and 27, 2015.

The play is in the ancient Greek language, even though the students (the director and the actors) didn’t even know how to pronounce the Greek alphabet before taking on the project. The students also received helpful assistance by Professor Yasunori Kasai, as well as other professors in the Department of Contemporary Literature and Greek and Latin Studies.

Students at the Department of Classical Studies organized the Classical Drama Society in May 2014.

The University of Tokyo is the best Japanese university and one of the best worldwide. The University’s Greek Tragedy Club which was founded in the 1950s and has featured members who went on to become important figures in the field of ancient Greek studies in Japan, such as Professor Shigeichi Kure (1897-1977) and professor of ancient Greek literature Masaaki Kubo.