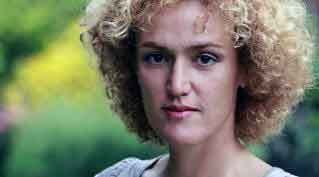 
Elpida Skoufalou was born in the island of Chios in Greece. She is a Pierce College graduate. She studied Economics at the National and Kapodistrian University of Athens, Theatre at the Art Theatre (Theatro Technis) Karolos Koun, Music and History of Art at the Sorbonne University. She has worked as a theatre and film director and as a critic in film, radio and TV.  She has taught History of Cinema, Media and Acting at the Art Theatre (Theatro Technis) Karolos koun, as well as translated numerous plays. Her film “I heard god crying”, under the auspices of Unesco, on ecstatic rituals has been shown in festivals around the world. At the 2012 Olympic Games in London and at the 2015 Special Olympics in Los Angeles she directed the performance entitled “Sisyphus” with the Golden Olympic medalist, Ioannis Melissanidis. She is the artistic director and the film director of Athens University cultural site yougoculture. She is the mother of three children.