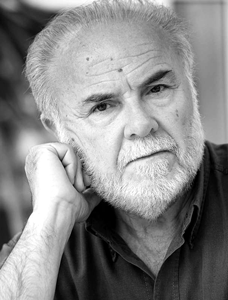 An event with the poet Michalis Gkanas

Georgia Ladogianni, professor of Modern Greek Literature at the Univeristy of Ioannina, presents the poet Michalis Gkanas and his poetry.

The guest of honor Michalis Gkanas will read his poems.

Students of the Department of Theatre Studies, University of Patras, enrich the event with recitation of his poetry.

The poem comes from far
It doesn't know whether it dances or lurches
Michalis Gkanas, The sleep of a smoker, p. 54

Michalis GKANAS was born in 1944 in Epirus, in northern Greece.

Since 1962 he lives and works in Athens.

He has published seven books of collected poems, one book of fiction, one book of «short and very short stories», lyrics for songs by well-known Greek composers and a loose interpretation of the «Song of Songs» («Song of Solomon»).

His poems have been translated into many european languages.

Distinctions: In 1994 he was awarded the State Prize for Poetry for his book Παραλογή.

In 2011 he was honored with the Athens Academy Award for his entire body of work.