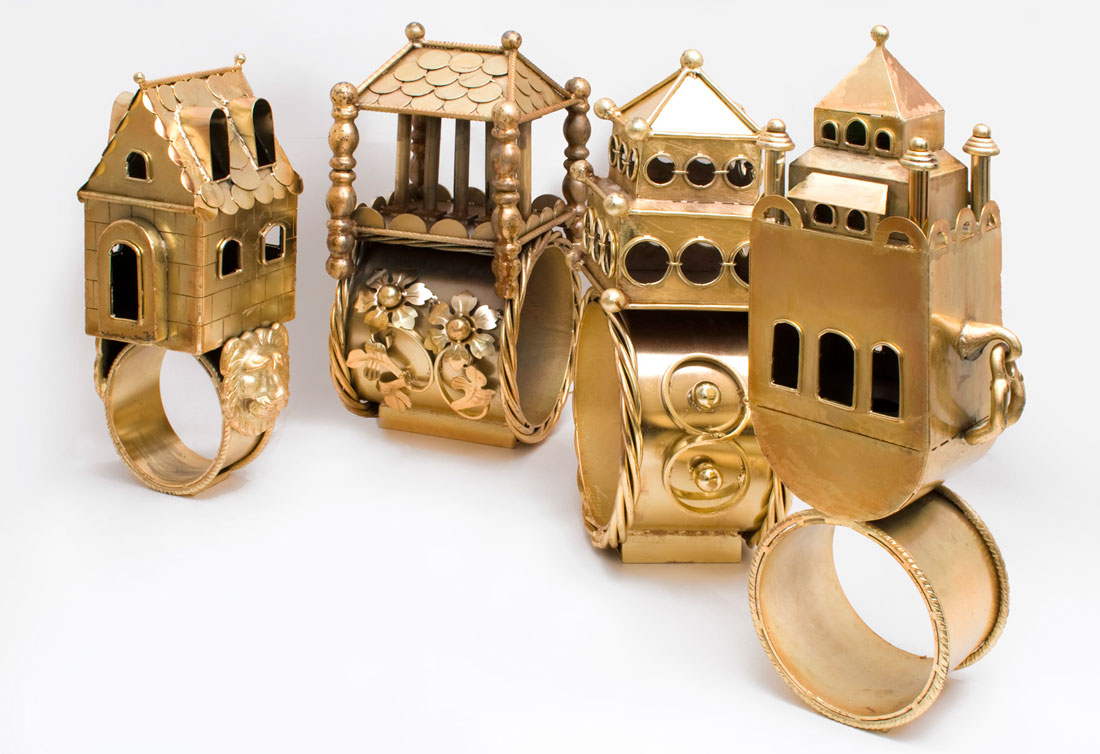 Aphrodite Liti exhibits her sculptures in Archaeological Musem of Delphi

THE MYTHS IN OUR HANDS

From all the jewelry that man ever wore, rings are the ones more intimately linked to personal stories, regardless of eras, religions, societies. They were used from very early on in man’s eternal confrontation with a hostile environment —in most cases. The mysterious, unforeseen powers of nature, the rage of his own gods, the enemy attacks, the proliferation of epidemics, the superstitions, were the threats dealt with through trust in amulets. The precious or semi-precious stones were invaluable good luck charms in ancient civilizations and their attachment round one finger with simple wire in the beginning guaranteed protection. The combination of religion and superstition survived to Christianity, only now rings functioned as tokens of religious faith and the hope of life after death. At the same time, rings betokened and still do, power, authority, exchange, vows, memories, passions.

The first rings were made in Egypt and East Asia about 2000 BC. –scarabs stringed in wire and later lapis lazuli fixed with golden wire– until today’s dynamic almost sculpture-like forms, renew their powerful attachment to an important story-for each of us. With the large rings-signets, the ancient roman senators and generals highlighted their power and sealed their documents, while at the same time the promise of marriage was given by a simple ring as guarantee (annulus pronubis) worn in the ring finger of the left hand which clenches the vein coming directly from the heart. There are also rings-charms, adulation rings, mourning rings, commemorative rings as well as sorcery and pagan rings.

Afroditi Liti always connects her work with the inevitable cycles of life, in the module The Rings exhibited for the first time in 2002 in Thessaloniki, she has transformed the fine shape of the ring into a crude sculptural form.

It concerns a module of eighteen rings-sculptures, which deals with the subject, which concerned Liti from 2000 until 2002. The beginning was signaled by the distance she decided to create between the conventional function and the emotional importance of the ring, the most personal piece of jewelry with the ring —sculpture created by her through a procedure which did not take away any of its “magic” powers.

The initial problematic bore fruits by the expressive power and the ability of the sculptor, to see into the result through a special vision, which ensured for her, the magic of metamorphosis.

This transfer requires on the one hand an experienced knowledge of the potential of the metals (copper, bronze and stainless steel), and technique, and on the other an idiosyncratic imagination in order to project the new image of the original model, so that the ring-sculpture is balanced between sculptural form and micro-sculpture. The traces of use, the emotional charge, the various verdigris, the weathered precious stones, have been transferred in the large size, where the slightest detail is discerned in enlargement

Afroditi Liti’s preference for forms, which depict the low-key moments of life and transfigure the simple forms of nature, was already apparent in the 1984 Pan-Hellenic Sculpture Exhibition at the National Garden –which unfortunately was never repeated– where Liti had transformed a sycamore leaf into a metal sculpture.

In the module of Rings, the different power transmitted by each magic ring, gives it a secret push, enables it overcome the dangers of the picturesque, but also harnesses the difficult circular shape, transforming it to a free sculpture. The forms, which emerged, alone or in combinations among them, are transformed under the light and in different environments. Amethyst, crystal, small tiles, are surrounded by heavy ribbons, the metals –mainly copper and bronze– are engraved with byzantine inscriptions, simple engagement rings are adorned with complex wire settings. But also the serpent, full of symbolism, powerful and perennial age-old motif, remains guard of secrets and promises even under this very different perspective.

Afroditi Liti is competing with her materials: the metals are molded gently, details are engraved with great care and the rings-sculptures are then either nickel-plated to attain the verdigris of gold or galvanized or bronze-plated.

The balanced result has unquestionable power and a defined symbolism. In today’s particular confrontation among individuals, and with most of the things that “bind” them gone, the transformation of the small ring into a multi-dimensional sculpture may highlight today’s meaning of “large” for all. The big sculpture here has managed to keep its weight and value, remaining a talisman, a memory, an attachment and a promise.