MADE OF WALKING: LANDSCAPE - MINDSCAPE 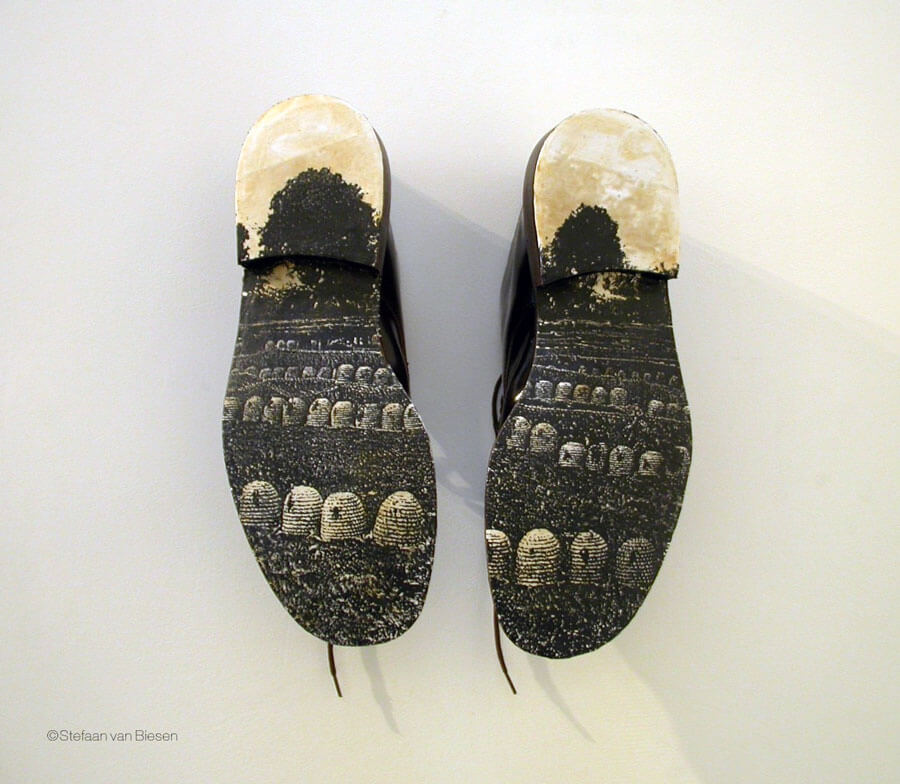 MADE OF WALKING: LANDSCAPE - MINDSCAPE : seeing, reading and editing the landscape

As a pilot within the Animart Experiential Arts School and Forum of Contemporary Creativity, during July 2016, the Milena principle organizes a forum with a series of workshops relating to walking, focussing on dialogues between performance, arts, literature and new media, inviting students, (young) artists, writers, walkers, performers, musicians and composers, sound designers, new media artist, developers, teachers, experts and scientists of different fields, to share their experiences and to explore together topics related to ecology, science, society and awareness.

WORKSHOP / "Flyways" flowing - flying, walking and sound inspired by flyways of insects, their trajectories and traces...

Flyways polarizes esthetical and scientifical meanings about the patterns created by dragonflies between water, earth and sky. Flyways is an artistic project initiated by the Belgian artist Stefaan van Biesen and elaborated conceptually and artistically together with Geert Vermeire and Simona Vermeire.

We explore the relationship between body - walking / movement and outdoor - spaces / awareness, engaging in collective walks, registration of movements - trajectories and generating new landscapes, using the body: through writing, sketching, sound recording, composition and use of locative media, tools to create a digital sound walk.

Flyways - promenadology (Spaziergangwissenschaft) and biogeometry / A theoretical introduction making a relation between ethereal paths of the dragonfly and the human paths, printing the landscape with poetical steps onto walking (and the principles of promenadology) as our artistic and ecological proposal. We situate promenadology in a modern theoretical frame, but reflects as well an oriental way of being, creating a bridge between science and traditional paths of thinking around the world, proposing simultaneously an elaboration of the topic throughout an esthetical and social approach of traces, patterns, movement and trajectories in space.

2) Going out to record spaces, the body and its movements.

3) Creation of a post-narrative of walks through writing-drawing, movement and walking scores.

5) Designing walk-trajectories, uploading contents on a map and creation of a digital sound walk by use of SonicPlanet editor and player apps.

Within a theoretical framework built within the interdisciplinary platform SinfoSaramago http://www.themilena.com/sinfosaramago.html, taking recourse to the comparative literature, and particularly, to the cultural studies, to encompass the recent perspective about the universal evolution. Pointing out the ‘visionary’ character of fictional texts, we explore a deep understanding of our contemporary way of life and underlining the fictional devices as an adaptation of the mind to the new evolutionary challenges.

Reading plants / exploring the visionary potential of texts, departing from the American writer Henry David Thoreau, in relation to a fundamental role of plants in literature, within a new ecological awareness and self-sustainability. Our approach is based on the perspective of ecocriticism in a hermeneutical path that refers to the “biosophical” turn (Sloterdijk).

Chlorophilia / the physical and sexual attraction that scientists feel for the natural world, specifically for plants and trees, a term introduced in 2004 by the journalist Bob Hoss: focusing in this seminar on chlorophilic narratives and on the artistic interpretation of Chlorophilia: biodiversity, initiated by the artist Stefaan van Biesen and and elaborated conceptually and artistically together with Geert Vermeire and Simona Vermeire.

The sessions will contain following actions.

1) Conference relating to Thoreau and Critical Plant Studies, Chlorophilia and Promenadology referring to walks as aesthetical and scientific modalizers in a vegetal world.

4) Creation of a post-narrative of walks

Hands on practica and demo-sessions exploring the potential of locative media through online platforms with free and user-friendly editor and player software and apps, enabling the creation and experience of interactive maps and/or walkable audiovisual contents for smartphone. Various platforms are presented in demonstrations and in practica, focusing respectively on their specific relation between walking and media: collaborative-participative approaches, cultural activism, and the use of diverse contents: sound, 3D soundscape and rich media.

noTours and CGEOMAP: noTours is an open source software and free web editor for everybody to create and enjoy sound walks on android mobile devices. It allows to share your walks and to listen to a mix of real sounds and recordings by wandering around. Questioning traditional audiotours, it inverts the experience of a tour in an invitation to get lost, following a path that you choose, building your own narratives as you decide your next steps. A project by escoitar.org, stimulating collaborative and participative creation processes, allowing both the creation of parallel realities and connecting the real space with the collective memory of its inhabitants. www.notours.org

CGEOMAP is a collaborative tool for the spatialization of information in the public space. It is an open source environment with a very friendly front end editing interface. A web-app and a collaborative map at the same time, allowing the creation of walkable audiovisual contents from the smartphone. A project exploring the crossroads of geolocation techniques of audiovisual content, spatial narrative and cultural activism, by VHPlab (Horacio González Diéguez) in collaboration with GPS Museum (Fred Adam and Verónica Perales). http://gpsmuseum.eu/cgeomap/index_eng/#cgeomap

Echoes. Echoes is a platform for making location-based experiences. Currently primarily in the area of enabling creative practitioners to make interactive soundwalks. The platform consists of a web app for uploading sound, images and text, organising them in collections, assigning geolocated areas (circles or polygons) to them and publishing to make them available for download. The mobile apps can download this content and then allow people to experience these collections of ‘Echoes’, using current location-aware technology in smartphones. The content is triggered when people enter an ‘Echo’. www.echoes.xyz

SonicPlanet, allows to create 3D soundscapes on any chosen location. The placing and editing of sound happens on iOS mobile devices using the GeoComposer app. The GeoPlayer app plays the sound piece , tracked via gps or via iBeacons. You can navigate/walk on a physical space augmented with the 3D soundscape which contains the virtual sound objects. The interaction of the listener with his location and orientation to these sound objects renders the 3D soundscape in realtime. The users of GeoComposer can share their creations with the community on the sonicPlanet GeoPlayer. Both apps are integrated with Google Street View, so that users can virtually experience both the visual environment and sonicscape together on the screen. SonicPlanet is open access. www.sonicplanet.com

VIDEO Flyways - Biogeometry / perspective about the natural paths of the all living beings, but also about the matrix of all life matter is an epistemological new turn to make us understand the constant universal transformation originated by vibration. The sound and its translation in visual patterns, a fractal graphic of the life or the primordial text of the bio-symmetry is the fundamental act of reluctance against the chaos, dispersion and annihilation. New technologies are today the resultant of a bio-translation in digital and mechanical fields of the symmetry of these living patterns. Epistemologically, within Environmental Humanities, evolves a deep understanding of the living landscape, trying to find valid solution to preserve the original bio-vibration of the nature against the deep alteration that the Human configured in this new era of the Anthropos. Our project focuses on a very poetical and philosophical part of this complex landscape of the biosymmetry: the dragonfly, a passenger between the dinosaur’s era and our human vibration dominating the biodiversity. Making a relation between ethereal paths of the dragonfly and the human paths, printing the landscape with poetical steps onto walking (and the principles of promenadology) is our artistic and ecological proposal.

VIDEO The science of walking / exploring the practice of Spaziergangwissenschaft (the science of walking) or promenadology in a new and complex interpretation. More than an esthetical and scientific tool walking becomes, in our approach, a quality of human beings to improve awareness. Art makes a new sense for the human kinetics, both in the landscape as in an urban environment, and related to the daily life. On that way promenadology becomes a very modern theoretical frame, but reflects as well an oriental way of being. The walking practice as explored in the proposed workshops intends to create a bridge between science and traditional paths of thinking around the world, proposing simultaneously an elaboration of the topic throughout an esthetical and social approach of traces, patterns, movement and trajectories in space, both as landscape and in an urban surrounding.

VIDEO Chlorophilia / introduced in 2004 by the journalist Bob Hoss (Chlorophilia - Exploratorium): the physical and sexual attraction that scientists believe to feel for the vegetal world, leading to hugging trees and in an extreme interest in gardening. Hoss described Chlorophilia as a passionate force that drives people to change and respect in general. A blurred line between culture and the natural world as a forum to explore how aesthetics and morality become related. 'Chlorophilia' became a common denominator for the work of breeders, (ecological) garden communities, researchers, and artists. The art project Chlorophilia appeals for respect for our natural world, as well to a transnational attitude, beyond isolation, as citizens of the world, a biodiversity in which everyone and everything is interconnected.

TALK Reading plants / a humanistic approach of the plants in the field of Comparative Literature and Cultural Studies in particular, departing from the theoretical principles of Consilience (Wilson, 1998) suggesting an epistemological unification of sciences and humanities. Contextualized within Environmental Humanities, and relating to the plants in the work of Thoreau, the workshop is inspired by the emerging Critical Plant Studies, focusing primarly on the American author, one of the pioneers in the literature and philosophy for his ecological views and experiences, emphasizing the ‘visionary’ character of the literary work in exegesis, considering that the author has developed fictional and scientific clues for a deeper understanding of the awarness in the plant world.

- Geert Vermeire (Belgium)
Curator, artist and writer, working and living between Greece, Portugal and Belgium, with as main field an artistic practice focused on the performative, mixed reality and social practices, with the body in public space, community involvement and ethical involvement of cultural action as key elements. His writing activity meets with immersive formats of arts and extends to an interdisciplinary and artistic research involving walking, stimulating creative collaborations among others between choreographers, sound artists, new media artists, architects and writers.

- Stefaan van Biesen (Belgium)
Visual artist, multimedia artist, sound artist and writer. His oeuvre is focused on the research of walking as an instrument of knowledge and of artistic creation. An artistic trajectory of more then 20 years consists out of walks, drawings, projects, installations, videos, performances, texts and soundscapes, developed as an interactive process, a stream of ideas, images, sounds and visions in which collaborations with other artists, experts from various disciplines and community based artistic processes are important components.

- Dr. Simona Vermeire (Portugal)
PhD in Comparative Literature, University of Minho Portugal. MA in Image Studies, University of Bucharest. Researcher with fields of interest the connection between literature, arts and science, relating to Spaziergangwissenschaft - promenadology and the concept of consilience (Edward O. Wilson, The unification of science and humanities).
www.themilena.com

Workshops in collaboration with:

- Dr. Sinan Bokesoy (Turkey)
He is a composer, entrepreneur and developer of professional audio applications. He holds a PhD on computer music research from University of ParisVIII and Bs.C. in electronics engineering from ITU / Istanbul. He is the founder of SonicPlanet™ sonic augmented reality solutions on mobile platforms and also the founder of sonicLAB™ sonic synthesis plugin software for advanced sound design.