Selfie your... hidden self! 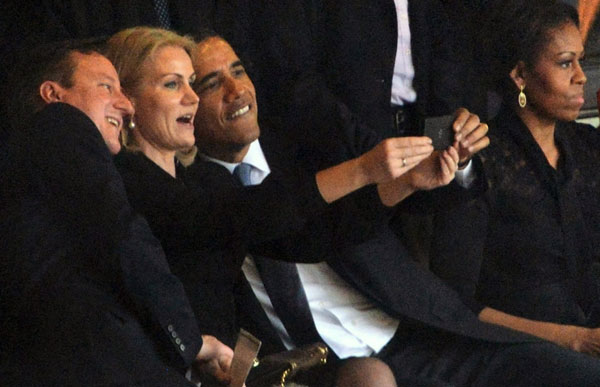 Dates: (Will be announced)

Hours: (Will be announced)

Following the example of the U.S. President and the Prime Ministers of Denmark and UK, the participants in the 8th ANIMART 2014, attempt to selfie1 their... hidden selves!

A selfie, a digital self portrait, defined and restricted by the length of our arms, has become in the hands of all people a means to capture an image of ourselves as we believe it to be perceived by the others.

These others, replaced by the camera we are now holding, which is considered to be an objective recorder, are now looking at us through the lense.

We pose to ourselves and to these onlookers and we choose the moment and the self we want to project.

By taking the photograph ourselves and often using the appropriate enhancement media, we feel we have control of the final result.

An artist, a photographer, can change this to something of a tool, where the camera itself becomes a witness of one's everyday existence and can be used in such a way as to document a self in transition.

The camera faces the artist like a mirror, not a new practice of course, as throughout history many artists painted or took photographs of themselves by looking at a mirror.

This time though the camera-tool can accompany, witness and record one's face by producing and unprecedented prolific number of images.

The abundance of choice, together with the fact that a camera can be everywhere with the person who carries it, can transform this practice to a powerful creative device.

It is a period where photographic self-portraits can constitute an interesting pictorial diary where the viewers can see and depict challenging images corresponding to various artistic and cultural choices.

1. Selfies are self-photographs, a style of portraiter that became popular in the present days.

a. A selfie is a self-portrait photograph, typically taken with a hand-held digital camera or camera phone.

b. Selfies are often shared on social networking services such as Instagram, Snapchat, and Tumblr.

c. They are often casual, and are typically taken either with a camera held at arm's length or in a mirror.