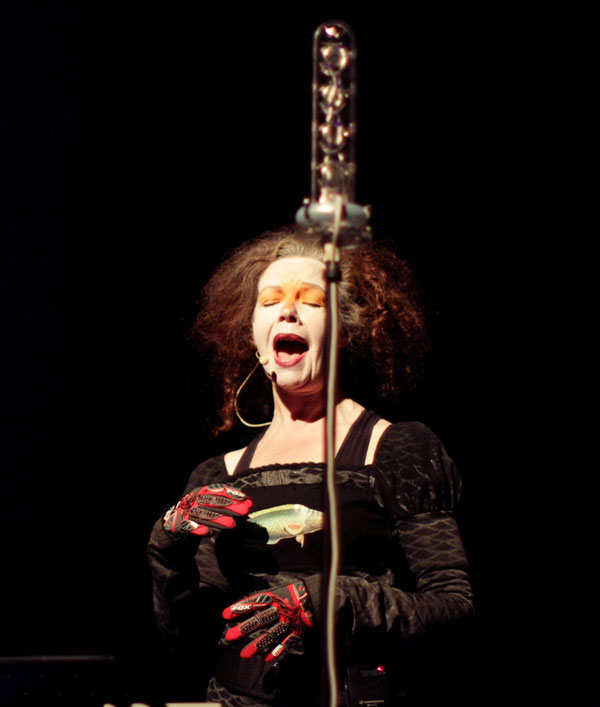 Pythia: Delphine21 stages an act of live mediation, bringing the essence of the ancient practice of the Delphic Oracle into the 21st century, re-imagining and uncovering its significance for contemporary performance.

Through the use of new technology (the Bodycoder System©) the live voice of the performer is digitally processed and gesturally manipulated to create extraordinary sonic landscapes and extended vocal registers that evoke a deeply imaginal realm crossing sonically from the human to the virtual, from the real to the mythical, from the figurative to the abstract.

The piece stages the situation of the performer/pythia as medium, mediator, instigator, vessel and author of her own transmutations.

The piece follows a quasi ritual structure drawing inspiration from the prophetic ecstasies of Cassandra as portrayed by Aeschylus in Agamemnon, beginning with an invocation of Apollo in shimmering light and fire.

[This piece is made with the kind support of Prof. Anastasia Georgaki and the Department of Music Studies at the National and Kapodistrian University of Athens, Greece]

MARK BOKOWIEC (Composer) and JULIE WILSON - BOKOWIEC (Performer/Vocalist) are award-winning artists that have developed a significant international reputation as innovators in the field of interactive sonic art and are considered experts in the field of live gestural interaction and the manipulation voice and sound processing with the Bodycoder System.

Their work is frequently programmed at international digital arts festivals and has been supported by The British Council, Banff Centre for the Arts (Canada) and the Arts Council of England.

They have been commissioned by the Science Museum London, Wellcome Trust wing (LSM), Wakefield City Art Galleries among others and have created new works in residencies at Banff Centre for the Arts (Canada), STEIM (Amsterdam) the Confederation Centre for the Arts (PEI Nova Scotia) the Traffo Theatre (Budapest), Dartington College of Arts (UK) among others.

Mark has written interactive works for a number of soloists for augmented Trombone and various wind instruments, and a large number of electroacoustic fixed media compositions, his Amera was a selected finalist for the prestigious Arts Electroniques des Concours Internationaux de Bourges composition prize.

Julie Wilson-Bokowiec is an accomplished physical performer and musician.

She has worked with such luminaries as Lindsey Kemp, the Austrian artist Hermann Nitsch and Genesis P-Orridge among others. She has created original work for opera and music theatre and has written and produced a number of award-winning stage plays.

Mark Bokowiec is the manager of the electro-acoustic music studios and the new Spacialization and Interactive Research Lab at the University of Huddersfield where he also lectures in interactive performance, interface and system design and composition.

The music department was recently awarded the Queen’s Anniversary Prize for ‘world-leading work to promote, produce and present contemporary music to an international audience.

Julie Wilson-Bokowiec is currently a visiting research fellow within the music department.

The proposed piece features the Bodycoder System© the first generation of which was developed by the artists in 1995.

The Bodycoder interface is a flexible sensor array worn on the body of a performer that sends data generated by movement to a Max/MSP environment via radio.

Movement data is mapped in a variety of ways to live sound processing and manipulation – this enables gestural control of sound and sound processing: we call this Kinaesonics.

Bodycoder also provides the performer with real-time gestural control of multi-channel sound spatialization/diffusion, and the same data mapping processes can be used to manipulate video/image material.

The Bodycoder has always been considered a SYSTEM rather than an instrument.

The system comprises of hardware, software (on and off the body) interfaces, image and sound diffusion, but also the presence of flesh and blood: the tangible and sensual relationship and long term collaboration between two artists - always in relationship to time and the spaces in which they work.

In performance, the work is responsive and sensitive to the presence of an audience for whom the work is enacted and who being part of the performance environment are therefore enmeshed within the relationship / dialogue/interaction.

Our work with the Bodycoder System is invariably a response to, a relationship with, and a becoming within a techno-physical environment.

We consider our work to be CYBERNETIC in the broadest sense of the term.

Our work reflects and manifests the operation of being within our particular techno-ecological environment.